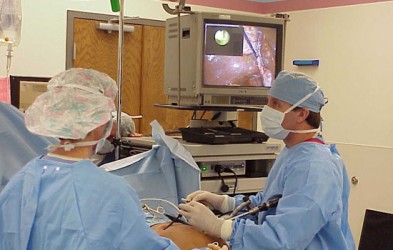 Gallstones (cholesterol stones or pigment stones) form in the gallbladder over many years. They can sometimes travel into the common bile duct, causing a blockage. If the common bile duct is blocked, this then obstructs the whole of the biliary drainage system as opposed to a blockage further up. Hence there is nowhere for the bile to go but up and the patient becomes jaundiced since certain waste products (bilirubin) are absorbed back into the blood stream. Furthermore there can be potentially fatal complications of infection of the biliary tree (cholangitis) and acute pancreatitis.

Passage of gallstones into the common bile duct occurs in approximately 10-15% of patients with Gallstones. The incidence is thus related to the presence of gallstones, which are very common (10-20% of population).
Risk Factors for Common Bile Duct Stone (Choledocholithiasis, Cholangitis, Obstructive Jaundice)
The predisposing factors for common bile duct stones are the same as for Gallstones. Risk factors for cholesterol stones include: high serum cholesterol leves, increased age, female sex, obesity, rapid weight loss, the contraceptive pill, and total parenteral nutrition.

Progression of Common Bile Duct Stone (Choledocholithiasis, Cholangitis, Obstructive Jaundice)
A blockage in the common bile duct wll lead to obstructive jaundice since there can be no outflow of bile. The complications that ensure are important:

Prognosis of Common Bile Duct Stone (Choledocholithiasis, Cholangitis, Obstructive Jaundice)
Choledocholithiasis on its own is not necessarily associated with increased mortality or marked morbidity. It’s complications, however, can be. Cholangitis is common and may respond relatively rapidly to supportive measures and antibiotics but it can also be fatal if urgent relief of the obstruction and drainage of infected bile is not carried out. Pancreatitis can also be a severe complication.

Secondary Biliary Cirrhosis has a similar prognosis as cirrhosis from other causes, since once cirrhosisdevelops, it is largely irreversible. The widespread use of ERCP has, however, decreased the incidence of complcatedbilary tract disease.

If the patient has Cholangitis